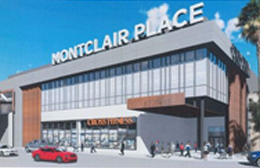 City of Montclair approves significant upgrades to Montclair Place Mall: On June 26th, the City of Montclair approved plans for the owner of the Montclair Place to demolish the former Broadway Department store at the east end of the mall, and to construct in its place a 144,000 square foot building which will accommodate a 12-screen movie theater, a bowling alley, and three new restaurants. In addition, the exterior façade of JC Penney as well as the northwest corner of the mall will be remodeled, as well.  This follows the recent redesign and rebranding of the food court as the Moreno Street Market, which is already open.

Many Chinese investors like purchasing real estate in the Inland Empire due to better investment returns (relative to LA and OC), good schools, and high growth potential.  Direct flights to and from China will make it easier for Chinese to visit and invest in the area.  This is a positive sign for ONT and for IE real estate. 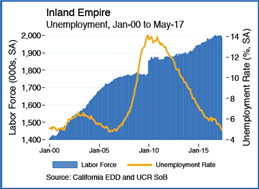 Employment is Trending Positive in the IE:  According to the latest (June) report from the UC Riverside School of Business, the Inland Empire added 1,400 jobs in May 2017, which is great news, since overall job gains in California have been flat for the past two months.  Year-over-year employment growth in the IE is 2.8%, which is nearly double the 1.5% growth in the state as a whole.  For the 12 months ending May 2017, the IE was responsible for the second most jobs added in California, trailing only the Los Angeles Metro area.

New freeway express lanes coming to I-10 and I-15: On July 12, the San Bernardino County Transportation Authority approved a 33-mile expansion of the I-10 freeway to build two tolled express lanes between Montclair and Redlands.  Phase 1, which will go from Montclair to I-15, will start in late 2018 and finish in 2002.  The rest will begin in 2021 and finish in 2024.

I-15: Two tolled express lanes will be added in each direction between Cajalco Rd. on the south end, to CA Rt-60 on the north end. Construction will begin in 2018 with the lanes projected to be open in mid-2020.  The new lanes will be built along the existing median of I-15, so unlike the CA-91 expansion project, that land will not have to be reclaimed from private owners.

This is a single tenant leased investment to Ross Dress for Less, operating as dd’s DISCOUNTS, with 5 years remaining on the lease term. Ross is rated A- by Standard & Poor’s. 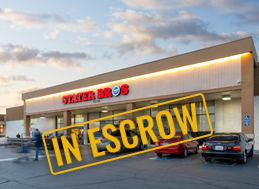 Grocery Anchored Center in Rancho Cucamonga – This is a 89,000-square foot shopping center anchored by Stater Bros, Bank of America, and Carl’s Jr. This is a unique opportunity to own an entire shopping center including the pads. The Stater Bros in this center is one of the top performing grocery stores in the region, with $920/SF in sales per year.

I am originally from New Jersey, and have worked for corporations such as Nestle PowerBar, Prudential, and Computer Sciences Corporation. I have a degree in Biomedical Engineering from Johns Hopkins University and an MBA from Duke University. 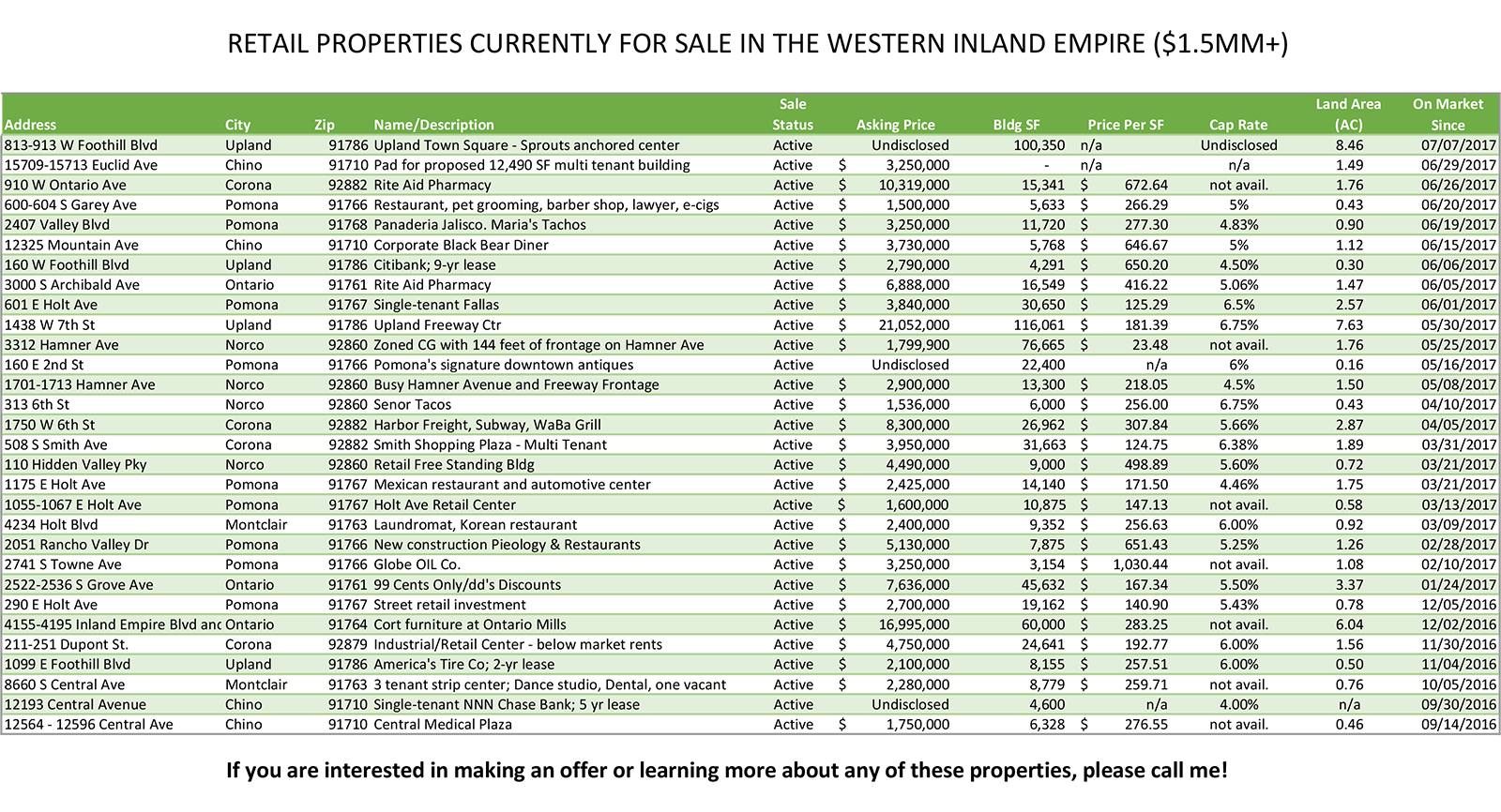 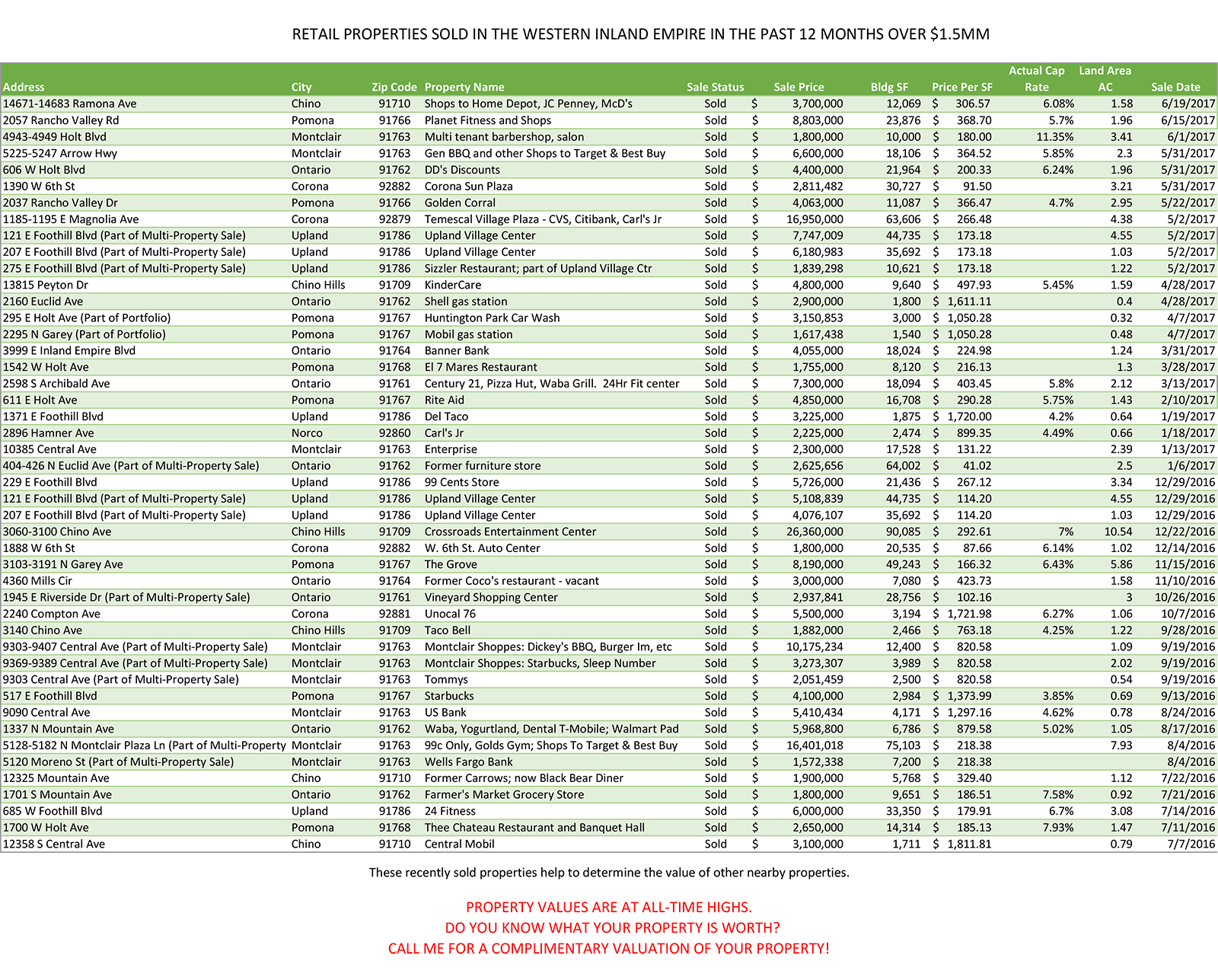