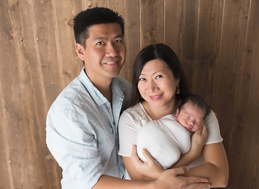 Sorry that I’ve taken longer than normal to get this latest newsletter out.  I’ve been busy because my wife Jennifer and I just had a baby!  Ethan was born on August 27th at 8 pounds, 5 oz, and 21 inches in length.  Ethan is our first child and we couldn’t be happier to welcome him into the world.  Mom is doing well and Ethan is growing into a happy, chubby baby!

In October, Walgreens announced an extension to its proposed merger with Rite Aid.  The merger was originally expected to take place at the end of 2016, but is now expected to close in early 2017.  The delay is due to the companies determining which stores would be closed after the merger. Up to 1,000 Walgreens or Rite Aid stores are expected to be closed.  The new company will become the pharmacy chain with the most locations in the US, with 13,000 drugstores, topping the current #1, CVS, which has 9,700 stores.

Sears, the parent company of Kmart, recently announced that it would be closing 64 Kmart stores, including the store at 17099 Valley Blvd. in Fontana.  Many analysts suspect that these closings put the company one step closer to liquidation.  However, the company’s CEO insists the company is on its way to improving its financial position with an online membership program called “Shop Your Way.”  As I had mentioned in prior newsletters, traditional bricks-and-mortar stores have been struggling to play catch-up to deal with Internet competition.  But some retailers are doing well.  Retailers that are succeeding include discounters such as Ross Dress for Less (and its lower-priced subsidiary, dd’s DISCOUNTS), and TJ Maxx, whose stock prices have well outpaced the S&P 500 index in 2016.  Their demographic still prefers to browse the racks looking for deals, and in many cases, their target shopper has not fully adopted the idea of shopping online.  The strength of Ross and TJ Maxx make them strong, stabilized investment as tenants.

Local Happenings: Keeping an Eye on the Inland Empire

Christopher Thornberg, PhD, of Beacon Economics, recently published an article that is bullish on the future of the Inland Empire.  Although the IE doesn’t often get the respect of its neighbors, LA and Orange Counties, there is a lot to get excited about regarding the future of our region!  I will summarize the key points here, but for the full text of his article, check out http://tinyurl.com/beaconecon2016.

I’d love to hear your thoughts on this newsletter. Call or email me to let me know what you think!

This is a single tenant leased investment to Ross Dress for Less, operating as dd’s DISCOUNTS, with 6 years remaining on the original lease term. Ross is rated A- by Standard & Poor’s. Priced at a 5.5% cap rate. Motivated Seller! Learn more at http://tinyurl.com/ddsontario 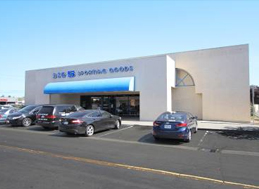 Big 5 just renewed their options in both locations for an additional 5 years. Big 5 reports sales and has a percentage rent provision to protect against inflation. The ground rent alone is worth more than the current lease. You’ll wish that Big 5 vacates the premises! Visit http://tinyurl.com/big5vallejo or http://tinyurl.com/big5victorville 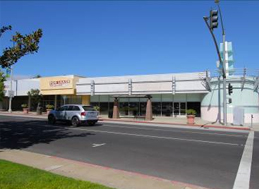 This property occupies almost an entire city block in Ontario. At 64,000 sqft, it is priced to sell at only $50/sqft. The property is 62% vacant, and is anchored by Secoya grocery market. Papa John’s and Wells Fargo are the other tenants at this property. Pro-forma cap rate is 10.6%!

I specialize in representing buyers and sellers of retail investment properties, focusing primarily on the Western Inland Empire. Prior to commercial real estate brokerage, I worked as a full-time residential real estate investor, flipping houses in Orange County.

Originally from New Jersey, I have worked for multinational corporations such as Nestle PowerBar, Prudential, and Computer Sciences Corporation. I have a Bachelor of Science in Biomedical Engineering from Johns Hopkins University and an MBA from Duke University. 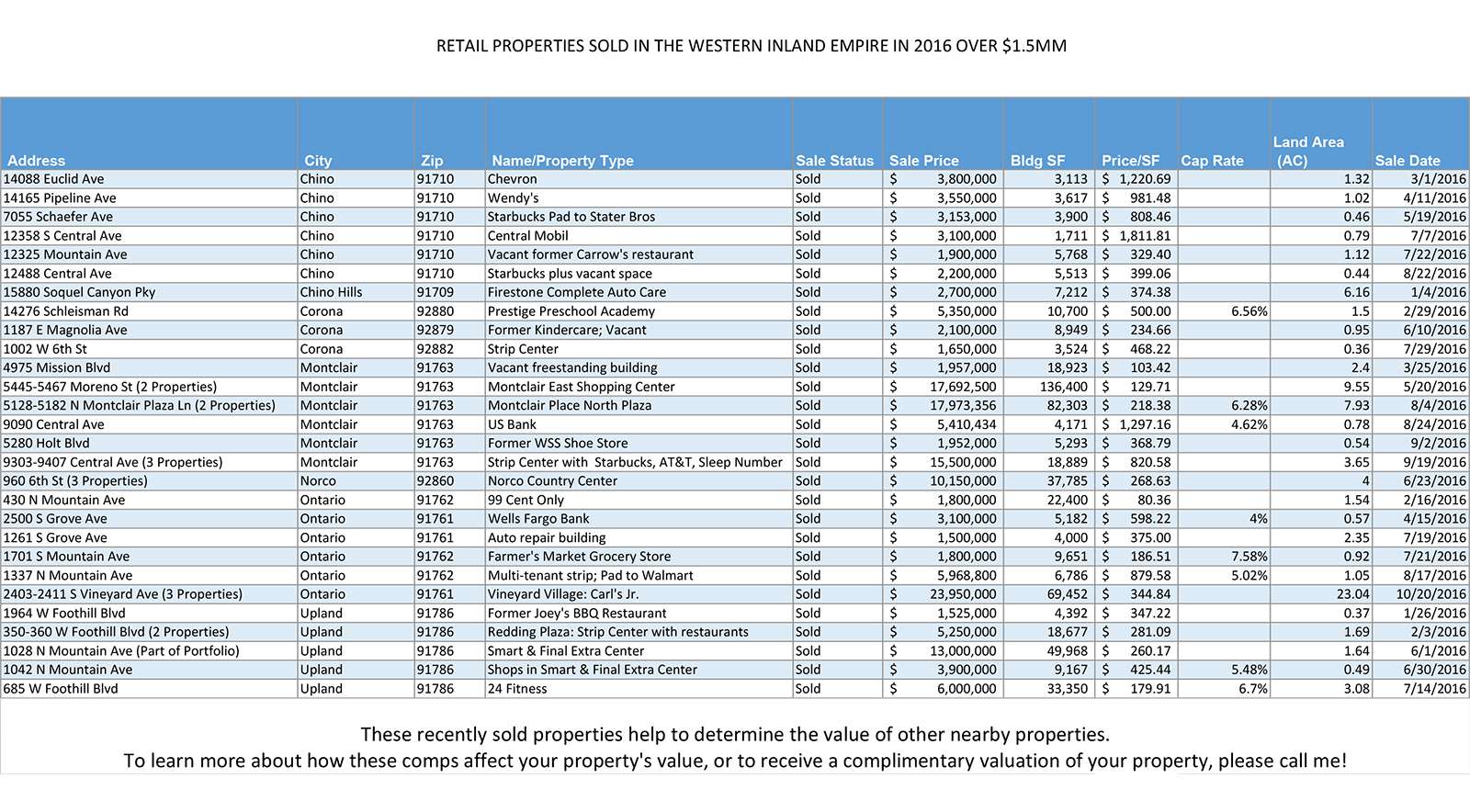 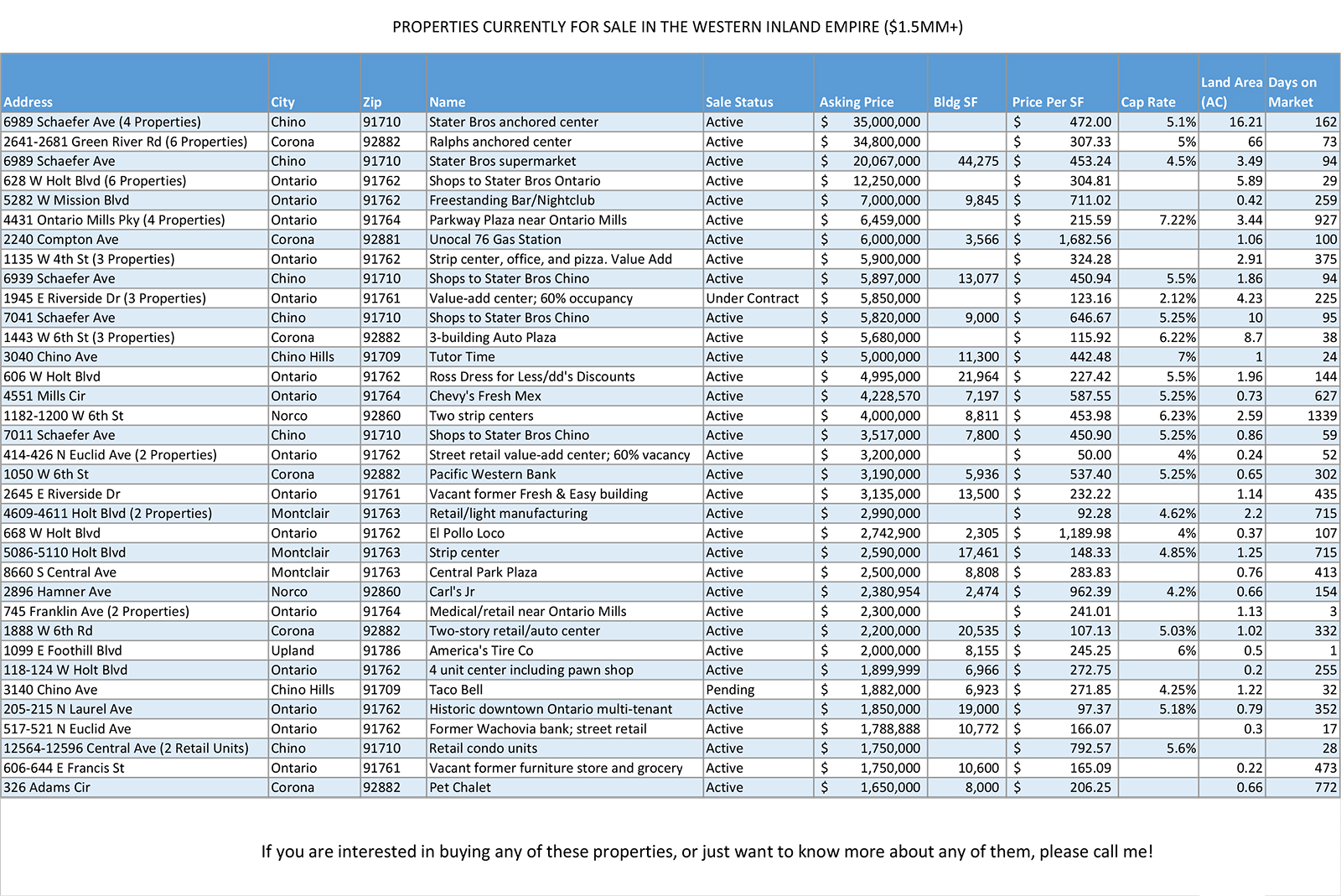