I saw an interesting graph the other day of different retailers and how they have fared during the pandemic.  I was surprised to see that the winner has been Home Depot, whose foot traffic in mid-May was 1.6 times its traffic in January.  What I found interesting is that the retailers doing the best during mid-March were Costco and Target.  How much of that was toilet paper sales?  Click on the image to view an interactive chart.

Due to rising coronvirus cases, in a press conference on Monday, Governor Newsom announced more closures.  Counties on the state’s watch, which includes Los Angeles, San Bernardino, Riverside, and Orange counties have been ordered to close all gyms, hair salons, malls, and churches. 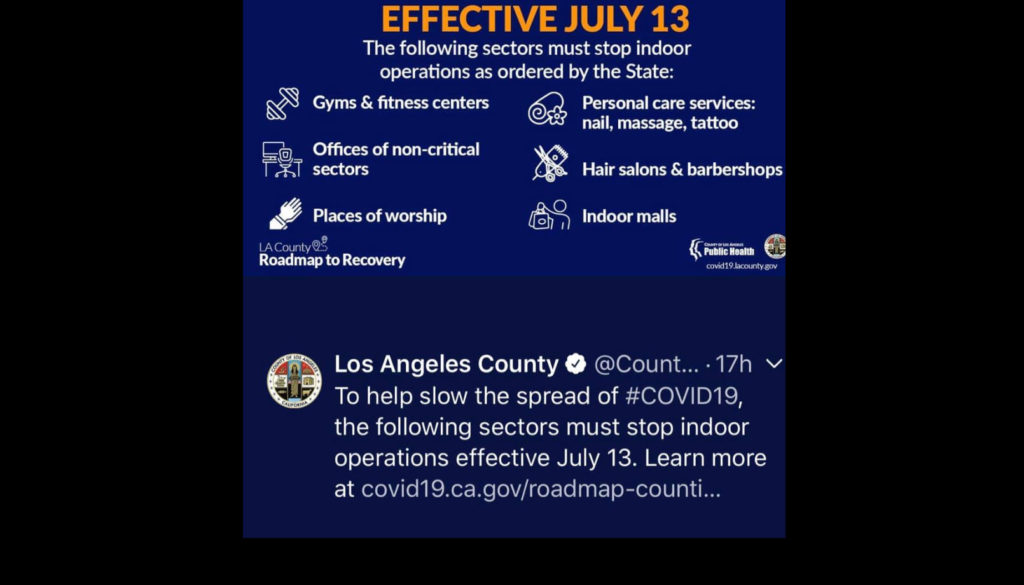 One irony of this is that on Monday, New York City just announced its first day of zero COVID deaths since the pandemic started, although infection rates among younger people are rising.
Apparently young people don’t seem to be too concerned about getting the virus or hanging out with others.  In Australia last week, a group of 16 people decided to have a birthday party despite strict lockdown rules, and when they got caught because they ordered a bunch of KFC for takeout at 1:30 in the morning, they were fined $18,000.  That’s a pretty expensive fast food meal.

Harvard will teach all classes online for the next academic year

Universities are getting ready for the next academic year.  I was surprised to see last week that Harvard University has decided that all students will be learning online for the 2020-2021 academic year.  40% of students, including all incoming freshmen will be invited back on campus.  So as a Harvard student, you’d be sitting in your dorm room on a computer, watching your professor give a lecture, possibly to an empty lecture hall that’s a 5 minute walk from your room.  I feel really bad for these students – college is a time to meet new people, in person.  Not over a computer screen.

Not every university is doing it this way, though.  My alma maters, Johns Hopkins University and Duke University, will be having a combination of virtual and in-person learning, and will allow flexibility for students who wish to stay home.  One thing is for sure – this year’s college experience will be very different from the usual.

Walgreens will be putting doctors offices in hundreds of locations

Walgreens announced last week that it will be opening doctors offices in 500 to 700 of its drugstores, primarily in areas where there is a shortage of doctors.  The company it is partnering with is called Village Medical.  Most of the clinics will be about 3,300 square feet, which would take up about a quarter of an average Walgreens store.

The City of Los Angeles Emergency Renters Assistance Program is now live. The window for applications started on Monday and goes only until Friday, so it’s a small window, and if there are more applicants than awards, then winners will be randomly selected.
It’s only for renters who live in a building that has two or more units.  So if you own a multifamily property in the city of Los Angeles, and your tenants are at 80% or below of the median income, then you can direct your tenants to this site to get help.  They could be eligible for up to $1,000 per month of free rental assistance that does not have to be paid back.  And the money would go directly to the landlord.

Because of the pandemic, there has been a trend for people looking to move out of crowded urban areas toward the suburbs.  In addition, with more people working from home, they want houses that are built with the latest technology for remote work.  Those two factors, combined with a shortage of housing inventory on the market have left homebuyers looking for new construction homes.  And the data show this.  Sales of newly built homes were up 55% in June versus last year.  This is the largest annual increase in new home construction since the recovery from the great recession 10 years ago.  And nationwide, prices for these new homes are 4.5% higher than they were last year.

SoCal homes going into escrow are up versus last year?!

Let’s take a look at what’s happening in Southern California, based on data from Zillow for the week ending July 4.  Watch the video for statistics, or read the article here.
Total housing inventory is down in the LA/OC area as well as the Inland Empire, and the same is true regarding new listings.  That’s no surprise.
But what I did find interesting is that properties going into escrow are actually up by 11% in the IE versus last year.  So despite a lot fewer properties to choose from, more of them are going into escrow.  Perhaps this high amount of interest for fewer homes is leading to bidding wars that are causing the median list prices increasing all throughout the four counties versus last year.

Costar has released its figures on nationwide retail leasing for the second quarter.  They say that retail leasing activity had its lowest point in mid April but improved since then.  However, it’s still less than half of what it was before the pandemic.  Dollar General, At Home and Ollie’s Bargain Outlet were among the most active lessees.  Also, automotive users have been signing new leases, with Caliber Collision and Autozone among the most active tenants.

In an interesting property repurpose, Blue Cross Blue Shield is leasing a 100,000 sf former target in Chicago and will be using the space for a call center and also for a community outreach center.  Similar to what I mentioned about Walgreens, Blue Cross is trying to offer health services in typically under-served areas.

Over the next few years, expect to see a lot of retail being repurposed to other property types.  This is something that has been discussed in the retail sector for many years now as many old malls and big boxes become obsolete, but the coronavirus certainly has accelerated this change.  Large developers are building their cash reserves to purchase distressed properties, with the goal of buying underperforming retail centers and transforming them into other uses, such as office, mixed use, hotel, or housing.

See you next week.