Video Index (with direct links)
1:24 The fast food restaurant whose sales are UP during the Pandemic
1:42 Trump’s executive order to boost unemployment by $400/wk
2:49 LA County program to help low-income residential tenants pay their rent
3:24 Mike’s first job, and Dick’s Sporting Goods’ success during the pandemic
3:59 Amazon is in talks with Simon to convert old department stores into warehouses
4:24 Hollywood & Highland is getting a $100 makeover and up to half of its retail space will be converted to office space.

You probably know that everywhere you go, your cell phone is tracking your location.  What happens to your location information?  There are companies that aggregate the data and then sell it.  I know it sounds creepy, but it does enable us to get some pretty interesting insights into foot traffic in retail stores and restaurants.

A company called placer.ai tracked traffic into several fast food restaurants.  All of the companies tracked had lower sales this year versus last year with the exception of Popeye’s, which defied the trend, and has been flat or up every month during the pandemic versus 2019. 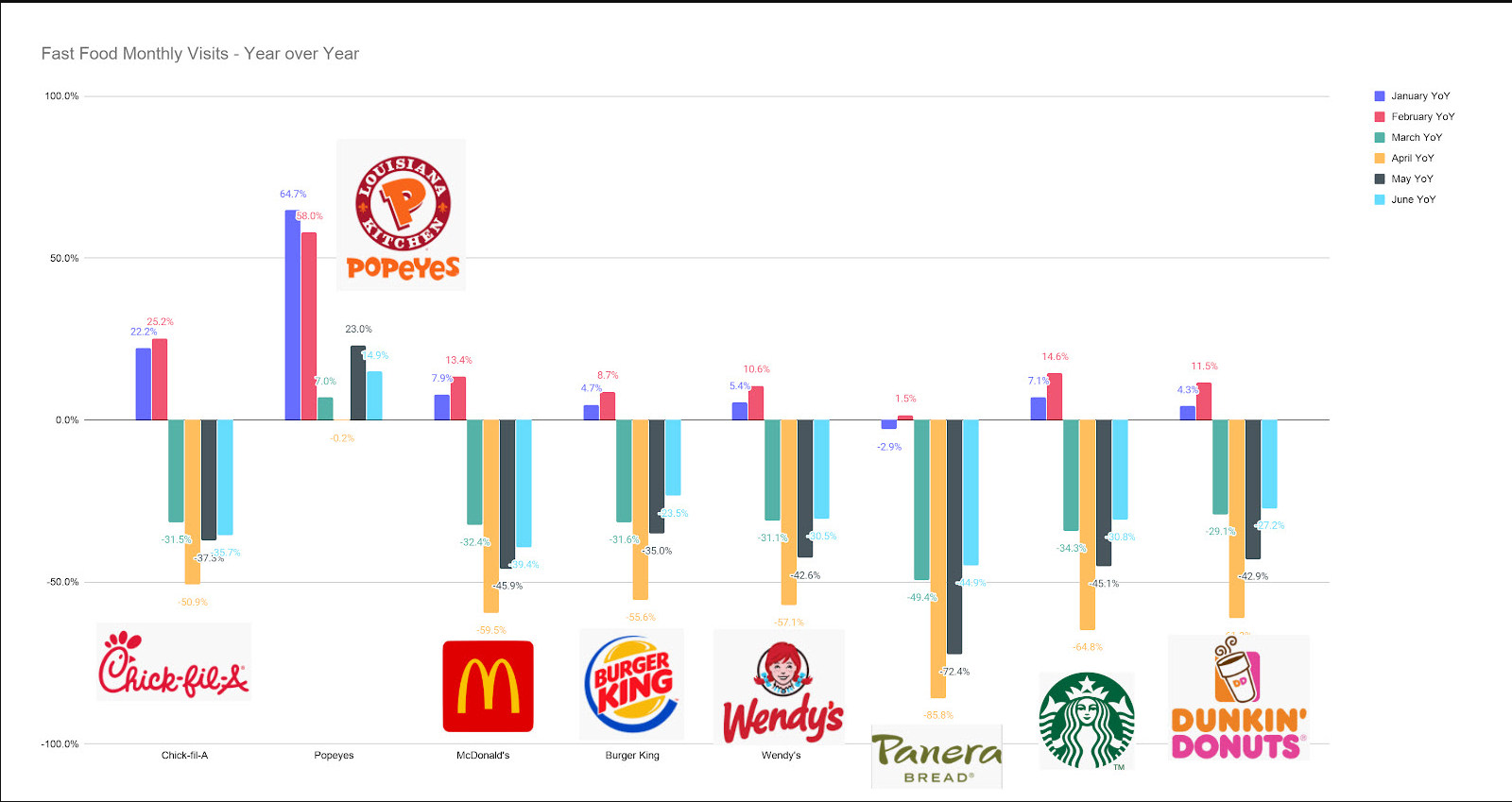 Democrats and Republicans were still at an impasse over the next stimulus program and how much unemployment would be distributed to people who still aren’t working.  Weeks of negotiating were getting the two parties nowhere, so over the weekend, President Trump announced an executive order that would extend unemployment benefits with a $400 per week boost.  While this is not as much as the $600 per week that unemployed people were getting before July 31, it would certainly be welcome by people who need it, since that $600 boost ended on July 31.

The federal government would pay for $300 of the $400 boost, with the other $100 coming from the states.  States would have a choice of whether they’d like to participate in the program.  But one challenge is that  many states don’t have the money to fund this program.  In addition, they would have challenges in reprogramming their computer systems to accommodate this new change.

Last month, I mentioned a rent relief program that offered $100MM of aid for low to middle income residents of the city of Los Angeles to help them pay their rent.

Now, the county of LA is offering a similar program which would provide up to $10,000 of assistance per family. Remember that this is only for residential tenants, not for commercial. The payments would go directly to the landlord. So if you have tenants who you think could benefit from this program, visit https://211la.org/lacounty/rentrelief to complete an application.  The program opens for applications on August 17. My first job in high school was as a cashier and a sneaker salesperson at Sports Authority in East Hanover, New Jersey. Sports Authority is long gone, with many other sporting goods chains disappearing, as well. But one that stands above the rest in today’s market is Dick’s Sporting Goods. It’s a bit surprising that while many retail chains are closing locations and declaring bankruptcy, Dicks is opening 11 new stores this month across several of their brands. Not only that, but most of the new stores they are opening are in shopping malls, which are clearly suffering with many department store vacancies.

Simon Property Group, the largest mall owner in the US, has been in discussions with Amazon about turning empty JC Penney and Sears stores into warehouses. I’m sure that Simon isn’t too happy about partnering with the company that helped to put many of its tenants out of business, but after reporting its worst sales quarter in nearly 10 years, Simon is going to need to do what they can to re-lease all of that vacant space and stay afloat. Hollywood & Highland is Getting a Makeover

The Hollywood and Highland Center shopping center, which houses the Dolby Theater, home of the Academy Awards, will be getting a $100 million dollar makeover which includes renaming it to Ovation Hollywood.

I’ve always enjoyed going to the center and watching a movie, or catching a shuttle from there to the Hollywood Bowl.  But apparently, it was not very successful as a retail center.  The plan to redevelop the property will convert up to a half of the shopping center’s total space into office space.  The iconic elephants will be removed as a part of the redesign, which I’m bummed about.

This project is representative of a trend that we will likely see a lot more of in the coming years – converting retail to mixed use centers.  The project is supposed to be completed by the end of 2021.  Read more at the LA Times.